As Belle in “Beauty and the Beast” at The Lunt Fontanne 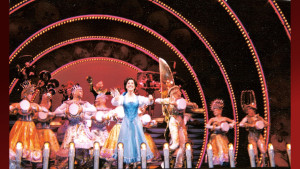 ……..for once again……. I was bowled over. Michelle Mallardi was an amazing Belle. That she sang splendidly was one thing. That she acted the part beautifully was another. But during “Be Our Guest,” when the time came for her to do high-kicks, she did them so effortlessly. Talk about triple-threats!  ~Peter Filichia, Theatre.com
As Gina in “One Last Ride” at Blooming Grove Theatre
Michelle Mallardi copes valiantly with Gina’s plight, right on down to her labor pains~New York Times

As Gina, Michelle Mallardi is very effective, but never more so than in the play’s creepiest scene……….We hold our breath as Mallardi holds hers. ~The Star Ledger

Michelle Mallardi, as Gina and Andrew Lionetti as Carmine are picture perfect as innocent victims caught in the web of Angelo’s gambling problem……. ~Entertainment News

As Diana in “A Chorus Line” at Paper Mill Playhouse 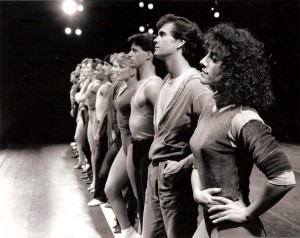 ……..the cast is exceptional. Any one of these energized and committed dancers could have been one of the 500 different performers who played in Broadway’s longest-running musical. Ted Otten, New York Times

The cast consists of young dancer-actors, some of whom are wonderful. Michelle Mallardi is Diana Morales………who sings the lead beautifully in “What I did for Love”. ~Star-Gazette

Albin Konopka’s musical direction has snap, power and heart in all the right places. Particularly in the stirring, rendition of “What I Did for Love” by Michelle Mallardi ~The Shield

As Eva Peron in “Evita” at Maine State Music Theatre

Michelle Mallardi as Eva Peron commands the audience as Eva must have her people. As Eva she knows how to enthrall with glamour, style and the kind of unpredictable whim that becomes a haunting legend. Mallardi also has a soaring voice for the beloved “Don’t Cry for Me Argentina” as well as “High Flying Adored. ~Times Record

Michelle Mallardi as Eva, unflinchingly glides through a range of complex emotions and difficult musical phrases. Mallardi sings and dances with energy, vitality and star-power befitting a character like Eva Peron. The audience seemed to worship her just as the people of Argentina must have worshipped their own Evita. ~Casco Bay

As Maria in “West Side Story” at Jupiter Theatre: 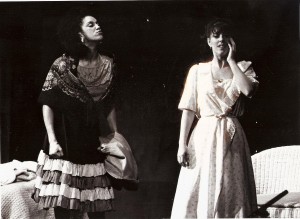 Nothing Stops the show’s songs from taking flight. As Maria, the Puerto Rican girl newly arrived in New York, Michelle Mallardi has an exceptional, classically tinged soprano voice, full of tone and feeling. Her love duet…..”Tonight” and….”One Hand, One Heart” are beautifully rendered. Her dramatic A boy Like that….is a highlight of the evening. ~Palm Beach Post

Michelle Mallardi is a shining Maria with a slivery, sustained soprano voice and a good acting style. Their joint scenes are especially touching, particularly the balcony scene with Tony climbing the fire escape to express his love. It makes sparks fly. ~Palm Beach Daily News

From their first meeting at the school dance, the chemistry between Tony (Carr) and Maria (Mallardi) grabs you right in the heart. ~The Weekly Buzz

“Mallardi is a dewy-eyed petite Maria who turns out to be tougher than she looks.”

“I guarantee that by the play’s end, you will be reaching for the tissues.”

As Anita in “West Side Story” at Augusta Opera House

Michelle Mallardi is a tough and sexy Anita. She had the audience shouting over the applause for “America”. ~Broward News